You are here: Home → About Us

About Cottman of Spartanburg, SC

Michael Morrison likens the experience to the climactic scene in Indiana Jones and the Last Crusade: The hero stands, toeing the edge of a cliff, a vast crevice the only thing between Indiana Jones and the secret room that holds the Holy Grail. Jones must take a “leap of faith,” stepping out across the void, trusting that the invisible bridge he read about will appear.

“That’s what I felt like every day,” Morrison says. “I was staring into this fog, just hoping that there was a bridge below me.”

The only difference was that Morrison had already jumped. 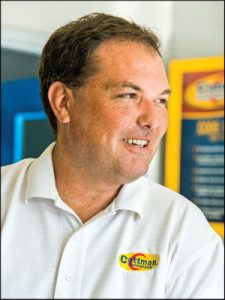 In May 2009, he left a cushy corporate job with a steady paycheck to purchase a struggling location of the Cottman Transmission and Total Car Care chain—a shop that was completely devoid of cash flow, derailed by its dismal reputation and shoddy work.

By 2010, he was still waiting for that bridge to appear.

“There was a whole list of things I needed to try to fix to make it work,” he says. “It was a struggle.

“The shop’s reputation was terrible. All you had to do was look at the poor reviews on Google and it was pretty clear why it was going out of business before I bought it. But, I knew that if we could just change people’s minds—one customer at a time—we could make this work.”

Customer service would be the business’s bridge to profitability, he says.

“We just had to have faith that it would work.”

There are a lot of great things about working in the corporate realm, Morrison says. Pay, benefits, stability, a clear career path—he appreciated everything his 15-plus years in the oil and gasoline industry gave him. He built a home and a life for himself, his wife and their three children.

It also left him longing for more purpose in his work.

“You just reach a point where you want to enjoy what you’re doing,” he says. “I wanted to really just feel good at the end of the day about what I was doing, and I wanted to do something on my own.”

Morrison, who earned a Master of Business Administration in 2005, wanted to run a business that could provide value to his Spartanburg, S.C., community.

He began looking at local listings and found the Cottman shop for sale.

Morrison had always been a “shadetree mechanic,” and had a passion for the industry. Throw in that he happened to have been that Cottman shop’s very first customer when it opened in 2002, and it seemed to be the perfect fit.

“They rebuilt the transmission in my ’86 Corvette right when they opened,” he says. “I thought it was sort of a great coincidence. They had done a great job on it, and it just seemed like the type of business that, if you ran it the right way, it’d be a great way to make a living.”

This was in late 2008, and when Morrison contacted Cottman about the facility, he got the full picture: The 3,900-square-foot, three-employee shop was churning out just 20 jobs per month and grossing barely over $200,000 a year. And, at least according to angry online reviewers, the small amount of work the shop did was well below average.

“But it had a good location, a good town with good people, it had a brand behind it, and this was at a time where it wasn’t easy to get financing,” Morrison says. “There was no way to get a business loan at the time, and with the rough shape of the shop, I was getting a bargain.”

Morrison emptied his 401(k) and bought the shop, officially taking over in May 2009.

“The problems? Well, where do I start?” Morrison jokes. “The poor reputation was the most obvious. You could see it in the online reviews, and the amount of work they were doing.”

MAKING IT RIGHT: Morrison has worked hard to earn the respect of customers like Lyndsey Cobee (left). Focusing on these one-on-one interactions has helped change his shop’s once-damaged reputation. Photos by Stephen Stinson

Then, there was the less obvious issue: the cash flow, or lack thereof. The previous owners had gone broke; if Morrison hadn’t bought the shop, the business would’ve been shut down and evicted. So, aside from his own personal savings, Morrison was starting with no operating capital.

The equipment in the shop was also in rough shape, presumably because of the financial struggles.

One of the four  lifts no longer worked. They were missing—or severely low on—basic supplies like oil and lube products.

“It was basically a nightmare,” Morrison says with a laugh. “It was everything you never want to hear about a shop.”

Morrison says it was clear: The past problems of the shop stemmed from a lack of leadership. Coming from the corporate world, he had seen again and again the impact—both good and bad—leadership had on a company.

He tried to set the tone for expectations with his team during a meeting the very first day.

“I started out by just drawing a triangle with the words ‘customers,’ ‘staff’ and ‘management’ each at a corner,” he says. “I just explained to them that each point of this triangle is equally important, and every decision we make going forward is going to be made because it is fair to the customer, fair to the team and fair to our management. You can’t ignore any part of it if we’re going to be successful.”

Because Cottman is a chain, a name change (or other rebranding effort) wasn’t possible in rebuilding the shop’s reputation.

So, Morrison looked up each negative reviewer online and, when information was available, reached out to them, letting them know that the shop had changed ownership and that he would like the opportunity to right whatever wrong the business was responsible for.

Three customers took him up on the offer, and his team rebuilt their transmissions free of charge.

Michael is a great example of someone who took up customer service as the priority of the business—not as some corporate, brand philosophy, but something that was a priority to him as a person and an owner.
With all of our successful owners, it’s almost always about attitude, outlook and just general competency in running their shop. When you have an owner that’s fully invested and really focused on making sure the customer is taken care of, that’s felt through the whole shop—the staff, vendors, customers, everyone.
When a customer throws you the keys, they’re putting a lot of trust in you to do that job right. It’s a big responsibility, and that’s something we want to embed in all of our franchisees. You need to earn that trust every day with every customer.

In all, he did 12 comebacks in his first three months.

“I didn’t expect anything in return, but just wanted to make sure they knew we were serious about our reputation,” he says.

A number of them deleted their previous reviews; others responded with a positive update.

“I also knew, just from basic knowledge of vehicles, that transmission work couldn’t sustain a business long term,” he says. “We needed to bring in full service work. That’d help us increase car count and give us a chance to get out in front of more customers and really market ourselves that way.”

Despite having two full-service technicians on staff, the shop had done zero oil changes from January to May of 2009. He began putting oil change offers into his direct mail advertising pieces, and they began taking walk-ins.

“And when we were doing transmission work, we’d look for ‘throw-in’ jobs,” he says. “We’d find that maybe a seal is leaking somewhere else, and we’d fix it. Then, I’d point it out to the customer when they came to pick it up, let them know we did it free of charge. Little things like that go a long way for the customer, and when you’re doing that on large jobs, $12 isn’t going to affect your profitability.

“You can look at that as a marketing cost. You’re trying to earn that customer’s trust, earn their business, and hopefully, get their referral.”

No turnaround is quick and easy, and it wasn’t for Morrison.

Morrison has been able to put that money into the shop—he bought new lifts and replaced old equipment; he reorganized the shop, turning a previously unused storage room into a quiet area designated for his builder to work undistracted. He recently renovated the front lobby and replaced the old sign out front.

It was early 2012, Morrison says, that he finally felt the “bridge under his feet.”

“I kept my faith in the idea that doing the job right, operating in an honest and trustworthy way would pay off,” he says. “This is my business and it’s a reflection of me. As a business owner, there’s no one to blame but yourself. It’s on you if that customer doesn’t get what they need. It’s on you if your employees can’t make a living.

“It’s a scary feeling knowing that, sometimes. My staff, my customers and my family all depended on me making this work. We finally reached that point where it is, and we’re just working every day to push across that bridge.”

All Cottman Transmission centers abide by Cottman’s complete service philosophy, which calls for your vehicle’s transmission to be repaired properly the first time, so that you don’t have to lose either time or money.

We will road test your car, perform our FREE and exclusive TransCheck 21 PLUS Service and examine the transmission pan to determine if your transmission problem can be repaired without the transmission being removed from the vehicle. If it is necessary for your transmission to be “rebuilt”, “overhauled”, “remanufactured”, or “reconditioned”, (these are interchangeable terms), a rebuilding procedure will be performed according to our rigid technical standards and backed by our nationwide warranty.

Cottman will never compromise its standards just to make a vehicle “superficially drivable.” We will never perform a low quality service that would result in increased costs, inconvenience, and possible hazardous driving conditions for our customers.

To provide quality transmission repairs at competitive prices with our success being built from repeat customers who trust the service we provide.

Our service Assurance is to be fair and honest in our dealings among ourselves, our customers, our vendors and our community.

We will continue to keep updated on the latest transmission repair and vehicle technologies to assure we provide a superior level of repair service.  The Spartanburg, SC Cottman center operates with the highest level of honesty. We will continue to build on our 50 year reputation through the quality of service provided.

We are in business to serve the transmission repair needs of all customers who use Spartanburg, SC Cottman.  Our goal is for our customers to recommend Cottman to others

Within 15 Miles with a Major Repair